Under the frame of a new initiative by the Spanish Harbor Authority, “Faros de España” (Spanish lighthouses), there is a specific proposal of adapting the lighthouse of the island of Sa Conillera  as a “rural hotel”.

Sa Conillera is currently a Special Protection Area  (SPA) and a Site of Community Importance  (SCI) (terrestrial and marine), and is part of a Natural Reserve that includes several islets and coastal areas of the west coast of Ibiza. A new SPA proposal, based on the marine Important Bird Area (IBA) inventory, will extend the current SPA (see Figure below). 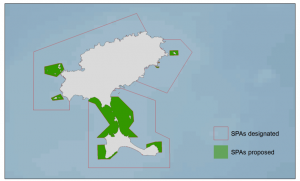 Figure. Ibiza and Formentera, with current (green) and proposed (red contour) SPAs, the latter proposed in October 2013 and to be approved by mid 2014.

The islet is one of the best preserved colonies of Balearic shearwater (over 60 pairs), where a monitoring programme was started by SEO/BirdLife in 2011. This was initially supported by two European Union programs, and later by  the Ibiza Preservation Fund.

In addition to the Balearic shearwater, the islet also holds breeding Cory’s shearwaters, and a colony of Audouin’s gull (200-300 pairs). The Natural Reserve is also a stronghold for the (Mediterranean) European storm-petrel, with almost 2000 breeding pairs estimated. Other values include an endemic subspecies of the “Ibizan lizard” (species endemic to Ibiza & Formentera), as well as endemic species of snails and beetles.

The hotel could controvert the current legislation, and would pose a threat to the local biodiversity. In the case of the seabirds, it would be a source of disturbance, particularly considering that some shearwater nests (both of Balearic and Cory’s) are located by the lighthouse. In addition, making it a regular human settlement implies a serious risk of introducing terrestrial predators, most likely rats and mice. These would have a negative impact on the breeding performance of the local seabirds.

Action undergone and planned include:

Next LinkGreenpeace Rainbow Warrior in Ibiza