Today Greenpeace protested outside Cairn Energy’s HQ in Edinburgh in solidarity with Alianza Mar Blava (Blue Sea Alliance) who are opposing oil exploration around the Balearic islands. Cairn’s plans threaten the future of tourism, fishing and endangered species like dolphins and turtles. 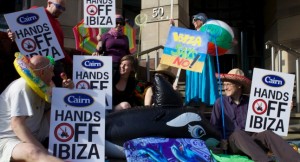 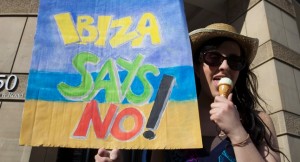 In Ibiza, the Greenpeace flagship, Rainbow Warrior, was joined by a flotilla of boats in a seaborne protest against Cairn Energy’s oil prospecting plans. Ibiza and the Balearic islands are well known to many British people as one of the most beautiful and popular tourist destinations in the Mediterranean. But for local people it is their livelihoods that are under threat.

The waters around Ibiza are particularly sensitive. Just off its coast is an area designated by Unesco as a World Heritage Site for the marine ecosystem supported by posidonia oceanica seagrass which is only found in the Mediterranean.

“Cairn Energy tried to explore for oil in the pristine wilderness of the Arctic. We successfully opposed them despite threats and intimidation from the company. Now they want to move their operation to the sea around Ibiza, threatening dolphins, turtles and the livelihoods of local fishermen. That’s why today we are linking Cairn Energy’s HQ in Edinburgh with the Greenpeace flagship, Rainbow Warrior, currently in Ibiza supporting the local islanders in opposing Cairn Energy’s plans. We need to cut our consumption of oil by being more fuel efficient rather than going to ever more extreme lengths to get oil that threatens our environment.” 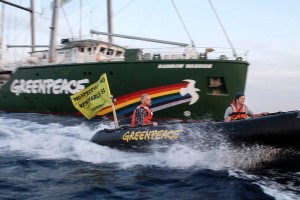 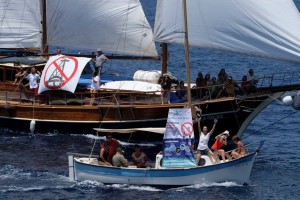 In January 15,000 people in Ibiza demonstrated against Cairn Energy’s plans to prospect for oil in the Mediterranean between Ibiza and Valencia. It’s a plan that has roused unprecedented opposition from Ibiza and the neighbouring small island of Formentera which together make up the Pitiusas Isles. They have been joined by a number of British celebrities including Kate Moss, Jade Jagger, and James Blunt, 100,000 registered objectors, and hundreds of technical objections from local authorities and institutions.

Next LinkLET’S HAVE A PARTY!